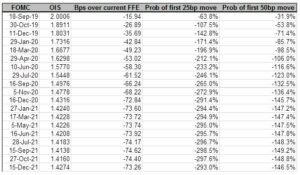 As expected, the Fed delivered a 25bp cut at today’s July FOMC meeting and pulled up the end of the balance sheet runoff to August 1 from October 1. There were two hawkish dissents by Fed Presidents Rosengren and George who preferred to hold rates at 2.25-2.50%. Dissents aside, the Committee suggested more easing is on the table by noting in the policy statement that “as the Committee contemplates the future path of the target range for the federal funds rate, it will continue to monitor the implications of incoming information for the economic outlook and will act as appropriate to sustain the expansion.”

During the press conference, Chair Powell clarified that the Committee is looking to provide easier monetary policy for three reasons: 1) insurance against downside risks from the weakening global back drop 2) extend the expansion and 3) support inflation. He reiterated several times that this isn’t the beginning of a long cutting cycle but a mid-cycle adjustment akin to the 1995-style easing to offset the headwinds in the economy. He also argued that the guidance towards more monetary policy support has already had a positive impact on financial conditions and the economy, helping to keep the economy on kilter.

Today’s guidance suggests Fed will likely provide additional accommodation in coming meetings to support inflation and offset the downside risks in the outlook. They will likely put more emphasis on global economic conditions as they appear to be worried about the potential spillover effects from weakening global growth through weaker US manufacturing activity.

The rates market interpreted the FOMC communications as hawkish with front end rates rising 4 bps and the 2s10s curve flattening 8 bps. The rates market was quite volatile during Chair Powell’s press conference as it saw mixed signals on the outlook for policy. The market initially sold off on Chair Powell’s comments that the rate cut today is “not necessarily” the start of a prolonged rate cutting cycle and that the action today was a “mid cycle adjustment”. However, rates then reversed some of this move after Chair Powell suggested he didn’t think there would be only one rate cut in this mid-cycle adjustment. Overall, the rates market interpreted Chair Powell’s press conference as sending a muddled and confusing message on the outlook for the fed funds target rate and one that disappointed market participants hoping for a more clearly dovish signal.

FOMC policy statement struck a relatively dovish tone by suggesting that (1) global developments and muted inflation pressures justified the policy easing (2) the committee stands ready to act to sustain the expansion. I also continue to believe that the Fed will focus on the uncertainties in the outlook to retain an easing bias in the short run. However, today’s muddled communications make me less confident in the near-term steepening pressure on the curve. The market will need clearer signals from the Fed before it can believe the Fed will truly act to re-calibrate policy to a more accommodative stance.