THE FED. What are the different outcomes and effects on the market and what I think might happen.

THE FED. What are the different outcomes and effects on the market and what I think might happen. 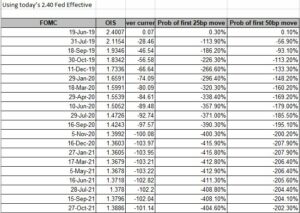 Yes PCE deflator was soft (1.4% headline, 1.6% core). but I think 25bps makes sense – despite ‘close to lower bound’ worries – simply because the economy is traveling OK and it may take another flare up in tariffs to elicit a sense of urgency.

By the way when the Fed last hiked in December the core PCE was 2.0%.  Both headline and core are off 4/10ths since then so inflation is definitely on the lower side than expected and the FED has said that inflation is a concern.

With crosscurrents persisting and inflation remainng subdued, I do look for the fed to possibly leave the door open to further easing but to avid pre-commiting to further cuts. I expect the statement to show modest, mark-tomarket changes and possibly two hawkish dissents (people who don’t want to cut).

Markets: With market expectations more dovish than my base case scanerio, I look for an initial bear flattener reaction to the FOMC.

FX: Markets may be priced for more optionality than the fed is likely to intimate, leaving the USD to take its cue from treasuries. The USD should be supported especially with its carry status in vogue again with the ECB being pre-committed to QE.

Here are some possible scenarios on how the FED could go and what would be the reactions in the market:

The FOMC eases and sets a high bar for additional accommodation — the “one and done” scenario. The Fed drops its “will act as appropriate to sustain the expansion” language from the statement.

Powell would likely reference the recent improvement in US data, improving inflation expectations and the US/China trade truce as reasons to be more optimistic on the outlook.

You should see 10 year rates sell off, 5s30s curve flatten.

The FOMC delivers a 25bp cut and leaves the door open to further easing. The statement repeats that the Committee “will act as appropriate to sustain the expansion.” Two hawkish dissents.

Powell will reiterate that the decision to ease was due to lingering global uncertainties and low inflation. He will likely leave the door open to further accommodation but is unlikely to commit to further easing.

You should see a modest sell-off in treasuries and see a small flattening in the curve.

This one is a bit tougher to gauge. The way the stock market has been going, every time we have seen bad news come into the market whether its data or tarrifs, more cuts get priced in and stock market rallies. So essentially bad news is good news for the market. This is not a sustainable way for the market to go up.

If they get very dovish than the stock market can rally even more.

I do think that it is possible that if the fed gets very hawkish the market will drag the stock market down to force Powell to cut again since the fed has made it very clear that they care about asset prices. It will be interesting to see how the market reacts here but it is not a clear case scenario.

Make sure you watch the FOMC results and then the press conference and watch the rates and USD market to see how it reacts to it to learn more.

As usual, none of the above is investment advice. It is purely for educational purpose. DO NOT put on any positions base on the above scenarios or suggestions. They can all result in SIGNIFICANT LOSES. I will not be responsible or liable for any of it