What is going on in the market right now and why is the stock market crashing? 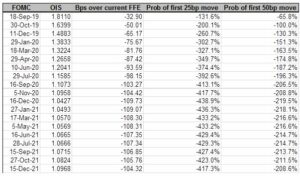 Stock market in USA has crashed almost 5% in a matter of two days as the market is forcing FEDS hand to cut more after they showed a hawkish stance during their press conference. Trump clearly wants the fed to cut and it is possible that Trump is increasing rhetoric with China to push the market down a bit to force feds hand. It all seems like a conspiracy but definitely seems to be playing out very well. I will make a separate article on why this could work or not work later this week.

What I am Watching in Markets Today

CNY in what appears to be a significant escalation of the ongoing US-China trade spat, USDCNH spiked to an intraday peak of 7.1114 amid press reports that the Chinese government has instructed state buyers to halt purchases of US Agricultural Imports. This comes after the CNY fixing came in at 6.9925, its highest level since last December. Elsewhere, the Caixin services PMI slid to 51.6 against consensus expectations for an unchanged reading of 52.0. Within this, the new orders component rose to 51.8 from 51.2 in June, while the employment sub-index also ticked up to 50.6 vs 50.2 in the previous report.