Whats going on in Argentina and why is it a big deal for us!

Whats going on in Argentina and why is it a big deal for us!

As you might know, Alberto Fernandez got 47% of the votes vs 32% of the incumbent Mauricio Macri in the primaries yesterday. The first round will take place October 27th and the second round if there is any on November 24th. The new president takes over December 10th. In order to win in the first round the winning candidate needs to obtain more than 45% of the votes or more than 40% and a difference of at least 10 points to the second. Otherwise, the first two candidates go to the second round.

Yesterday’s primaries were for practical purposes like a first round since all the political parties went to the primaries with a single candidate (candidates were negotiated in advance). The only difference with the first round is how the blank votes are counted. The market expected Alberto Fernandez to win by 3 points and the threshold to be considered market negative was Fernandez winning by 5 points. He won by 15 points. It is almost impossible for Macri to turn it around as the economy is not improving and if anything it will now get worse. Vidal (governor of the province of Buenos Aires, from Macri’s party) also lost by 17 points to Kicillof (from Fernandez party).

The currency depreciated more than 20%, external debt fell 18 points, CDS jumped 1,000 points and the stock market collapsed 35%. The central bank started to intervene lightly in the FX market and the policy rate jumped to 74%. I think the pressure will continue until the market cleans and volatility will remain very high but this will create some short term buying opportunities. For instance, 10y bonds are trading at 58 and we estimate recovery value at around 40-45.

Why is this a big deal?

Alberto Fernandez is running with Cristina Fernandez (CFK) as vice-president, so for practical purposes the Fernandez-Fernandez formula represents the Kirchnerism, who run the country between 2003 to 2015. Even though CFK chose Alberto to moderate the rhetoric and deal with the negative image CFK has, the formula is perceived as the comeback of populism. Alberto has avoided being explicit about willingness to default debt, but he implied that a default cannot be ruled out. He also mentioned other populist measures like stop paying the interest on central bank liabilities (LELIC) and instead give that money away in terms of subsidies to people. He also stated that the currency is overvalued and considered imposing capital controls, fostering FX instability for electoral purposes.

The group of economists working with him do not have great credentials, so unless Alberto changes his economic advisors nothing good can come out of that.

The market went to the elections loaded on the bullish side both in FX and EXD, which explains today’s price action. The market thinks Fernandez will likely default and impose capital controls and renegotiate with the IMF. In a nutshell, the market thinks Fernandez is the return of populism. In addition, if Fernandez wins he will likely control both chambers in Congress. The perception is that the much needed labor, tax and social security reform will now be less likely.

What do I expect now?

Between now and October, I do not expect Alberto to send any market friendly message as many people claim. It is true that if the economy sinks he will inherit a worse initial condition, but he will focus now on winning the election in the first round. He will likely keep his mouth shut to keep the 15 points lead. All the pressure will be on Macri and the IMF. Remember the next IMF review starts this week and the IMF is supposed to disburse $5.5bn right before the first round.

I think the central bank will let the currency go to adjust and validate a real devaluation close to 25% or 30% and try to avoid a much higher nominal devaluation. They will use a combination of higher interest rates and some FX intervention in the forward and spot market. However, I do not expect heavy intervention. The more they intervene the worst EXD will trade (more intervention means depleting reserves to pay the debt).

Once Alberto wins in October, he has an incentive to become market friendly right away and negotiate with the IMF and Macri the smoothest possible transition, although it will be tough. He has an incentive to force Macri to do the dirty job and clean the economy, but people in Argentina still have fresh memories of the 1989 hyperinflation (back then Alfonsin ended up moving the elections forward). Macri will avoid capital controls as much as possible, in particular before October’s first round. It will be key to monitor deposit outflows from the financial system.

From December on if Fernandez does not come up with a credible plan, we should expect easier fiscal (for instance he promised to increase pensions 20%) and monetary policy and therefore more nominal instability. The economy should contract another 2% at least and inflation north of 50%. Default (or a distressed exchange) is very likely in that scenario next year, even if there is a new agreement with the IMF. Fernandez will inherit a primary deficit of 1% of GDP. Financing needs are close to $30bn next year, though a big chunk is with locals, so there will be some financial repression. Of course this path is unsustainable and will lead to a crisis and posterior adjustment of fiscal and monetary policy, but it will be a painful journey.

Having said all that, I would not take everything Fernandez is implying face value. He until now had an incentive to sound not very market friendly, and between now and October he will likely not clarify much what he plans to do. He will loosely say that he not do something crazy but that’s it. He now needs to just win in first round and he is leading the race comfortably, so why to take risks?

I think what he says to win an election is not necessarily what he will do once he wins. I think there is a chance (bigger than what the market expects) that he starts by blaming Macri for all the problems of Argentina and keep with the fiscal adjustment as well as the monetary tightening (though with some changes), everything embedded with a new IMF program. The more “the bomb explodes in Macri’s hands, the more likely he will pursue that route”. But he cannot say he will do that before October, of course.

We opened 15pts lower thinking that would probably be where bonds would start clearing and oh did they ever…we traded 150m Arg bonds today with a 50/50 split between risk vs riskless trades.  We heard most of our competitors were not pricing at risk.

After we traded 15pts lower we dropped in increments of 3-5 pts to clear all the way down at -25pts.  We bounced mid-day when the CB intervened in the FX however bonds have struggled to hold their gains as we had a load of sellers come in towards the end of the day.

It’s clear this was not an expected outcome and the fear here is where is the marginal buyer?  At this point bonds seem like they will trade down to recovery expectations and I find it hard to see any meaningful bounces unless AF decides to come out and calm markets.  It all comes down to what restructuring scenario you think happens which will hinge on the FX. Do we get haircuts or no haircuts?  Extensions or no extensions? Regardless liquidity will be challenged and we need outside buyers to step in who now are looking at distressed prices because appetite from the EM landscape is likely to be limited from here until more clarity comes about. 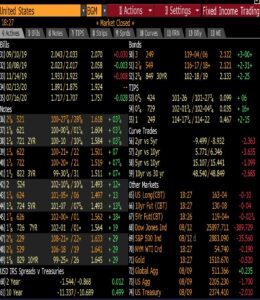 The US Market rallied on the back of Argentina news and 10 year yields approached 1.645. The stock market sold off on global concerns stemming from Argentina as well.

Thanks Argentina…. Haha But I love Buenos Aires so I hope they figured everything out soon.